Back from Fall-In, had some fun games and lots of good times. Once again I followed my rule of having 1 day of playing games, and day for a tournament, and once again I played the Epic tournament because I find it good fun. I was hoping to do a new army, but was to busy painting Lord of the Rings stuff to get together enough Sisters to really give them a go, ditto for Chaos. So I went for the Imperial Guard again, lots of artillery, tanks, dudes, plans the whole deal.

I thought I had lots of guys, but they really crushed me in the bodies department! Lots of guys and pick up trucks and demons and crazy engines, all kinds of stuff. 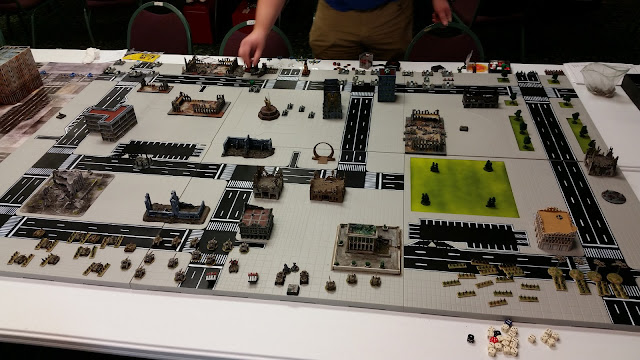 Set up for turn 1. I have both my artillery units and my Hydra AA guys on my objective in the middle of my back edge, basically with my tanks, and infantry on both sides. 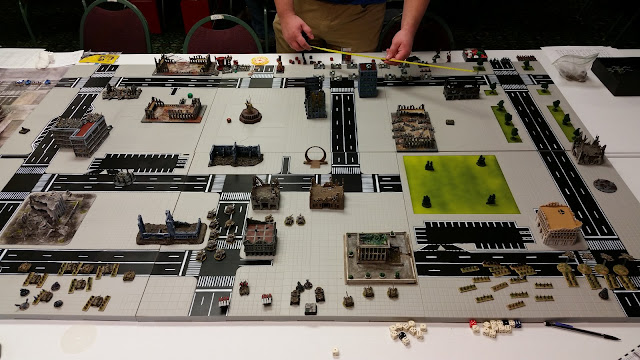 Start moving around units, I spent my first few moves dropping artillery barrages. While the Cultists moved up. 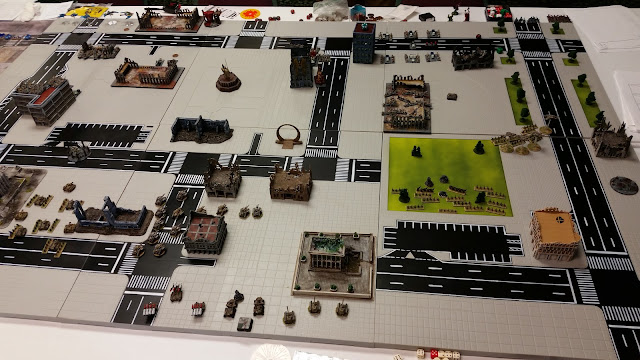 My tanks are pressing up the middle, on the other side by the park a unit of Cultists had moved up. I moved up with my Storm Troopers and their Valkyries, risking staying embarked to fire off all of their one use rockets. Then I think I won the initiative next turn and assault really hammering that poor unit of cultists. Or maybe I just advanced and shot I forget. 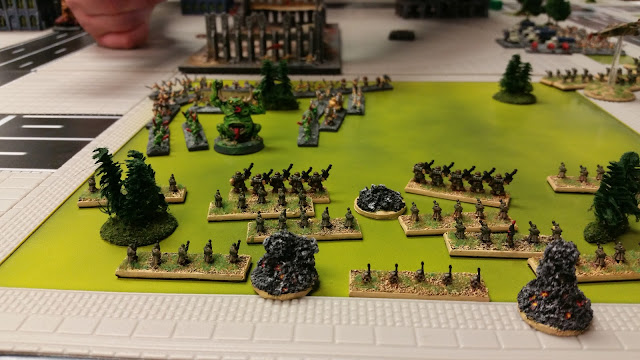 Some other cultists in a building summoned some Demons, including a Great Unclean one, and assaulted absolutely crushing my foot infantry platoon and sending the last few guys reeling back. 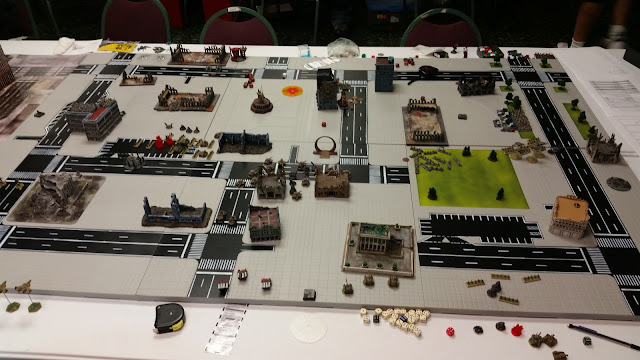 I advanced up the middle with my tanks, and put some good fire on a plague tower, but failed to completely kill it. Behind that building the main cultist squad had a plan to march up and next turn summon some Bloodthirster action to fight my tanks, but they failed to activate and lost their chance. 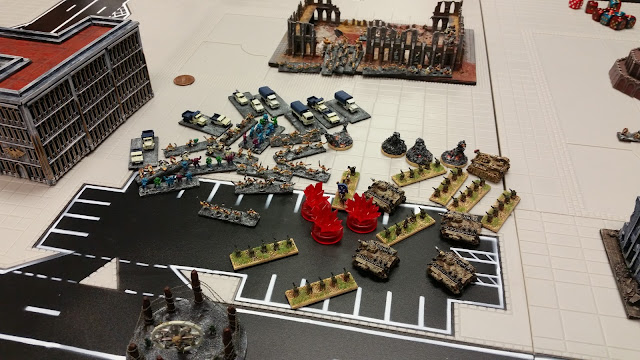 On the left flank another great assault, this unit of cultists had summoned some Demons the turn before but failed to activate. Now they tried it again and succeeded charging out with tons of guys and Demons. This one was even bloodier, first round went to a tie, and we had to fight it again! I think I lost by a bit but both our units were fairly mauled. 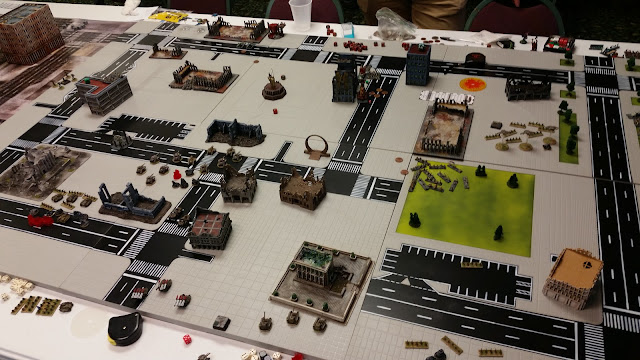 I assaulted with my Storm Troopers and pushed back another unit taking them on to an objective, they were having a good game. 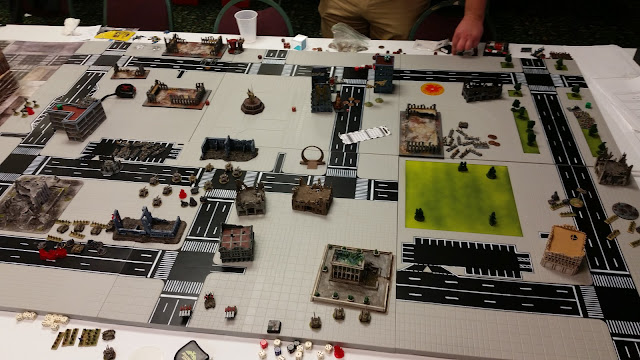 But they got beat up by yet more cultists. Can't fight everyone it seems hah. 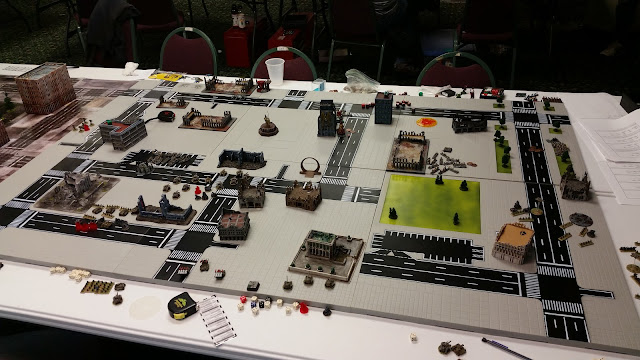 In the end no one could achieve any objectives so it went to points, we both did around 1750 but I was down by just 15 points! Crazy close for a 3000 point game, was really fun, had never played Cultists before and it was a good time, really made me glad to have some good artillery, and I won the air war as well which also helped allot.

For the second round I got to play against some really cool iron warriors, more chaos guys. Another new army for me to fight against. Kind of a similar army as me with lots of tanks and artillery and some infantry, but with a couple of super heavy tanks, one with a crazy super barrage, could be trouble. 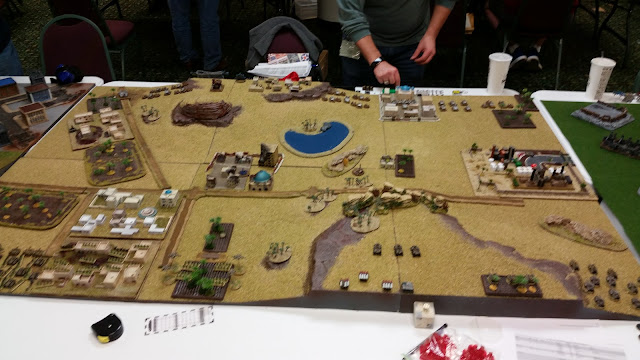 Here is the initial set up, I have my artillery park with their Hydras as usual around my blitz objective, this time protected by a hill and some stones. All ,y infantry is hanging out in some towns to the left, and just my tanks on the far right. I was worried about the artillery so was trying to spread out. 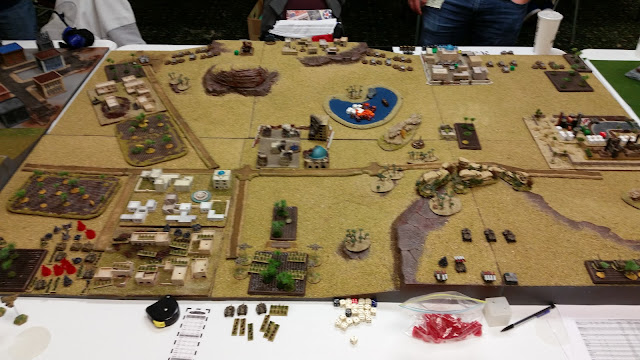 For the first bit we just bombed each other like it was WW1. The big barrage did some real heavy damage to my regimental HQ but they stuck it out. Having tons of teams can really come in handy. I mostly used mine artillery for counter battery fire, breaking the Iron Warriors smaller unit. Then the planes came out I think a pair of Chaos Bombers did some light damage, but my Thunderbolts intercepted and shot both down. 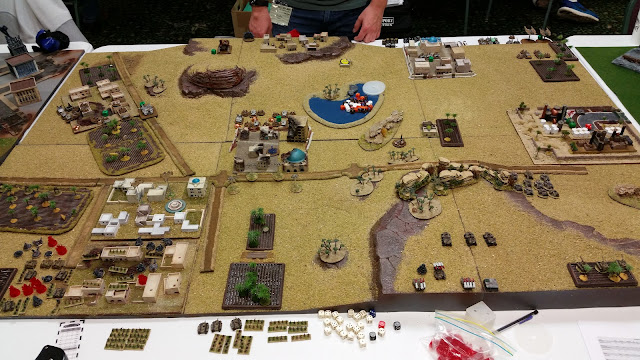 After bombing the crap out of each other we both started to advance, I rolled my tanks forward, planning to shoot up stuff in the middle then grab an objective to their right. Some Chaos infantry and dreadnoughts moved up behind the central town. My Valkyries repeated their strike doubling forward with the Storm Trooper embarked and firing their massive amount of rockets at the marines, dealing some good damage to them and their Rhinos. 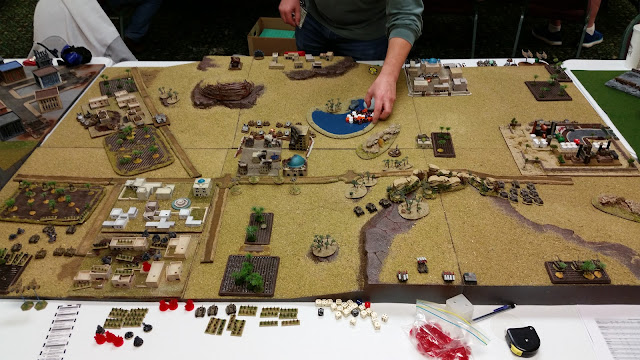 Then my Hydras advanced and shot up some Dreadnoughts, now that the skies were clear they were more free. 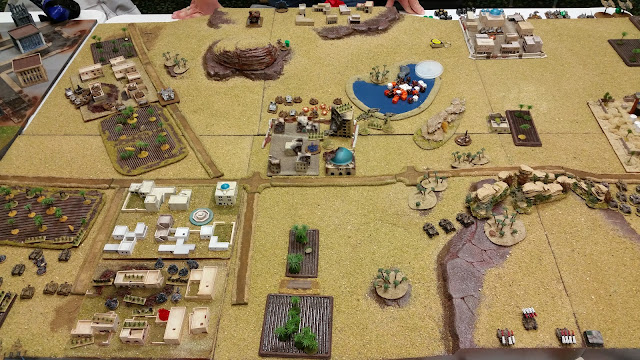 Next turn I somehow won the initiative and my Storm Trooper pressed the attack on the Dreadnoughts killing the supreme commander and most of them. 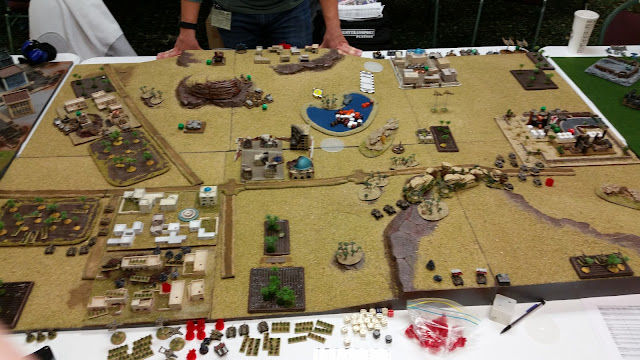 But the Marines struck back hard. The dead bodies are starting to pile up. The heavy Chaos Barrage went on my tanks this turn, but wasn't able to do much more then give them lots of suppression. 13 is a ton of hard to kill tanks, and it takes allot to break them! 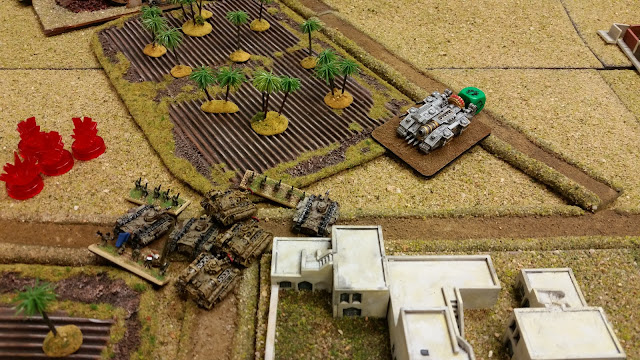 My Regimental HQ was really getting mauled and whittled down, but I decided to try assaulting the super heavy tank. I was thinking I had a good chance to break this, especially with my flame tanks helping. I won the assault and broke it, but it was fearless and didn't die, just rallied later on. MAkes a cool picture thou. 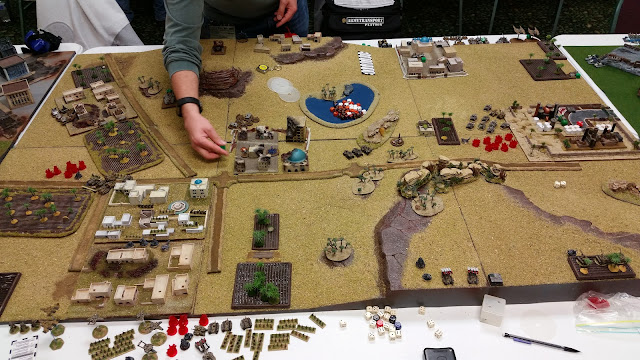 My tanks pressed forward again, and savaged some devastators that were on the far right objective. The artillery really smashed them, but was left one pin shy of breaking those Heroes! 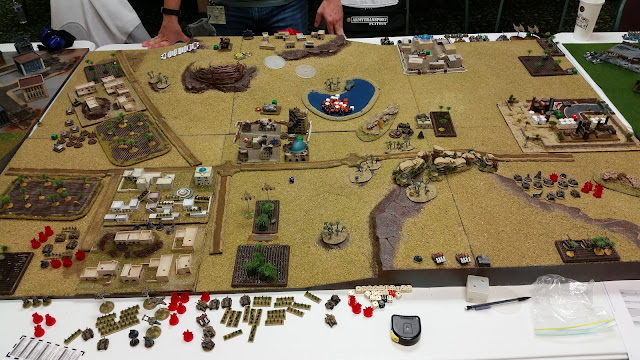 Next turn they broke them thou, but I was able to rally!

In the end again it came down to points, this time I was able to get the victory. Lots of dead stuff on my side, but spread around more. The tanks rallying at the end actually saved me the game I think, that would have been a massive 400 points if they were broken! Really enjoyed this game as well, Iron Warriors were a cool army to fight and I really liked this table. Lots of terrain that made for a great battle.

On to the third round, this time battling it out against the Space Marines. They had a pair of Thunderhawks, some Land Raiders, lots of Terminators, the whole shebang. 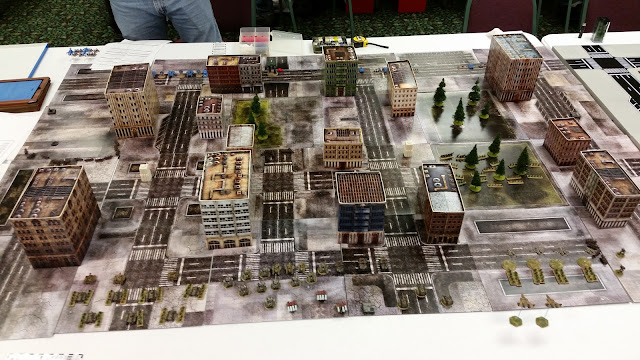 This time in a big intact city, looks cool but hard to pick out the small models in the terrain. I had my usual set up. Main idea is to rain disrupting artillery barrages down on the land raiders to try and get break there spirit, and grab whatever seems convenient. 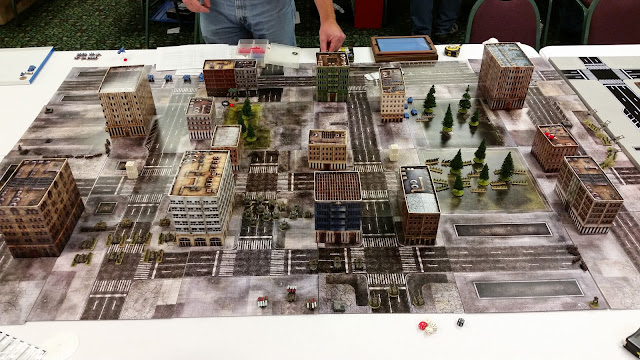 Artillery to start with, putting some good blast markers on the land raiders, and the land speeders, who both would fail to activate somehow! Really cramping the style of the Marines. ALso the Terminators forgot to teleport in which I imagine is not helpful. After that things started advancing. A Thunderhawk flew in on the left and killed a chimera or some infantry, but my Thunderbolts then flew on and somehow shot him down! Or maybe the Hydras helped on the way out I forget. This made the other Thunderhawk nervous so he just smashed some sentinels proving they can murder things. Some scouts advanced into a building near an objective on the far right, and once more my Storm Troopers boarded their valkyries and flew over missiles flying. 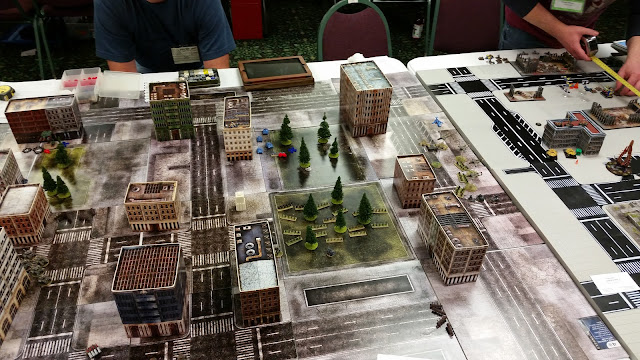 Infantry into the park, and Tanks advancing to annoy a titan. 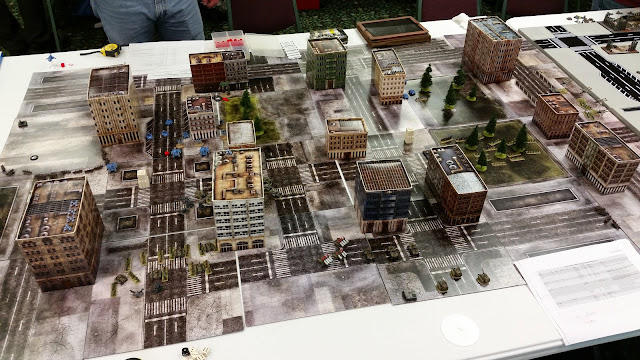 Next turn the Terminators arrived teleporting into some buildings. The first unit charged my Tanks but their high numbers and good saves beat them back just leaving one stand with a chaplain, for just 1 loss on my side. This made the others nervous so they just shot up my infantry. 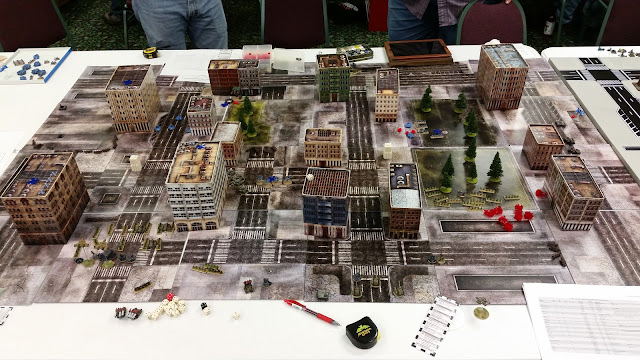 Guess I got excited and forgot to take more pictures. On the left the land raiders pressed forward into the middle attacking my tanks, but they put up an invulnerable wall of metal and I passed tons and tons of saves. Eventually I was able to whittle the land raiders down and kill them off. On the other side things were going my way as well. The Marines failing allot of activations somehow. In the end I as able to control a few of the objectives and scored break their spirit for killing the land raiders, and my Storm Troops flew to the enemies back field objective to secure whatever that one is called, and my Hydras took over their objective giving me Take and Hold.

Another fun game for sure, lots of tough units grinding it out. Kind of feel like it was won by my good rolling for saves, and the Marines repeated failures to get their units moving. The artillery dropping blast markers on things was way more effective then it should have been vs marines.

In the end after a coin toss I was left in Third place! Think that is the best I have done at the Epic tournaments, was my third outing as well I think. Look forward to the next one, hopefully I can get my Sisters of Battle done for it.